Below is a Blog we did back In 2009 about Charles Krafft, and some of the comments we received for outing someone we believed to be Racist!

CHARLES KRAFFT IS A WHITE NATIONALIST.... (click for full story).

We have never had to do this before, but due to the message we received in our myspace inbox from Charles Krafft we were left with two options:

We decided to go with option 2:


I'm approving Blacknerdnetwork as a friend because I've never met a black nerd. I'm trying to get with the diversity program here in Seattle, but it's kinda hard when the black kids on my bus won't give up that extra seat they're always sprawled across.

There is so much wrong with what you have written it is difficult to know where to start.

Your racially prejudice! My instincts tell me your not the sharpest razor in the pack so i'll break it down for you.

You judge people that you have never met by the colour of their skin!? At best this is STUPID, and at Worst it is RACIST.

Im sure you've met many Black Nerds, were just normal people that come in all ages, genders and professions... hey in fact some of us even drive buses.

We really liked your work and blogged about it. We then sent you a simple friends request on myspace. We were astonished by your reply.

However unlike you we will not judge the many by the few.


The original Disasterware, flirting with violence and beauty comes from the American artist Charles Krafft pioneer of the Pop Surrealism movement.

Of all the people acquiring guns in 1998 on the black market in Ljubljana, Slovenia, Charles Krafft was probably the only one who turned the illicit weapons into porcelain delftware.

Meeting with arms dealers in Ljubljana's cafes and bars, Krafft made arrangements to borrow Kalashnikovs and AK-47s ("the little black dress of the military industrial complex," he calls the assault rifles) so that he could use them to make plaster slip-molds. He then created meticulously accurate castings of the guns in white porcelain and painted the weapons with flowers, text and other decoration in the traditional delftware blue. The resulting collection of lethal but dainty satire became part of a body of work that provoked Mark Del Vecchio, author of "Postmodern Ceramics," to declare Krafft "one of the USA's most seditious artists [who] plays difficult, uneasy games with content and culture." 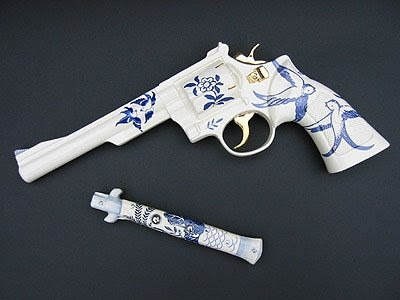 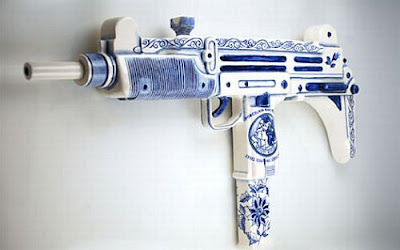 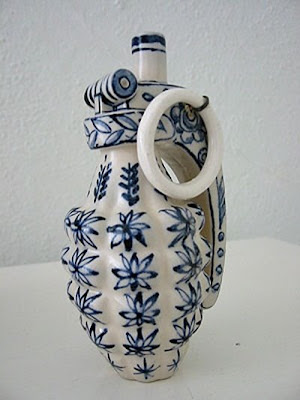 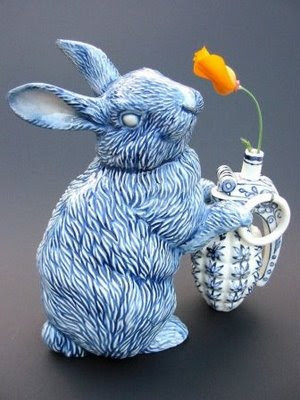 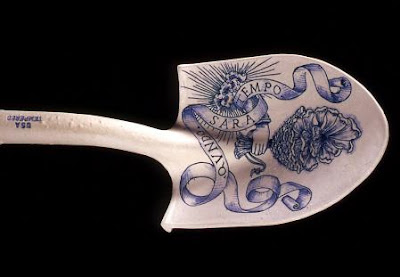 Charles Krafft talks about his work 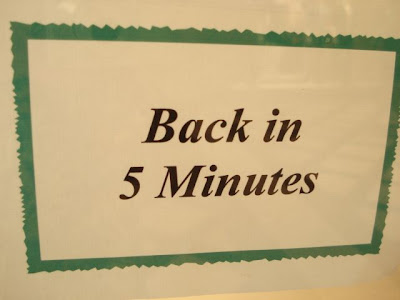 AACDD is calling for
further entries from UK designers and artists from various disciplines,
to exhibit their work at the AACDD Festival at the Bargehouse,
Southbank.

www.aacdd.org
Posted by BNN at 3:01 pm No comments:

more about this picture here

All from Pelicans & Parrots

The Archduke Franz Ferdinand was a hunter. During his reign over the Austro-Hungarian Empire, he filled Konopiste Castle, with countless stuffed trophies and antlers

A selection of trophies and antlers from Pelicans & Parrots prices from £29.99

Labels: Pelicans and Parrots, The Illusionist, trophies and antlers

RIP GIL The Godfather of rap.

Hard to put into words just what Gil has meant to many of us. Black political activist, poet, singer, musician and author. Through his honesty both in his work and his private life I am truly humbled and changed.

Gil will be sorley missed in this realm. RIP Mr Heron. 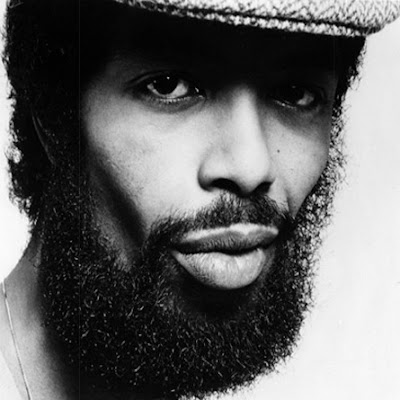 Saturday saw the launch of new mas band Bacchanalia, this new addition to Notting Hill Carnival presents Alter-Ego Through the looking glass. A theme which encourages you to delve into your Alter-Ego.

Bacchanalia was formed in 2005 as a fun mas band, we then saw them re-enter into Notting hill carnival alongside Bachanal Mas. Kelly and Andrew Rajpaulsingh are dedicated to keeping carnival culture alive here in the UK.
"We want to raise the profile of carnival and all the elements associated with it- from what carnival is to making the mas, the history of carnival and the true mas men of our generation, costumes and more"

We arrived at the venue after 11 and was please to see that the show had not started yet, the crowd was friendly and not clicky. The 4 front line sections had us in ore from the moment we stepped in. The oversize feather head pieces, back packs and jewelled bikini lived up to the teases they had been feeding us through Facebook.

The show started with a poetic introduction dissecting the historical elements and creativity to carnival which was a nice personal touch.

This band captured a new vibe and energy which we had not felt in a while, this is essential to creating a great carnival road experience. As long time Notting Hill masqueraders for over 14 years we liked that the band is medium with a capacity of 200, and focuses on good customer service.
On a negative side we felt that the costumes did not have any literal relation to the theme and therefore we could not make any connection to costume and section name (however this is true off so many carnival bands). The biggest deal breaker for us is the price, with Premium Leaders coming in at £295 and £350, Premium section Female £225.00 and males £195.00, which so far makes this band the most expensive for Notting Hill Carnival.

Overall the band gives you stunning costumes and looks very promising for the coming years.

We would like to say thank you to Kelly and Andrew for making us feel welcome.

Check out their Facebook and website for more pics and hype.
Posted by BNN at 5:12 pm 2 comments:

"What does a woman want?"

The great question that has never been answered, and which I have not yet been able to answer, despite my thirty years of research into the feminine soul, is "What does a woman want?"
Sigmund Freud

All from Pelicans & Parrots
Posted by BNN at 5:05 pm 3 comments:

We just got news that Black Star's Mos Def and Talib Kweli reunite in the UK for the first time since 1999 and we can't wait. Blackstar is on current rotation in Pelicans & Parrots.

Here is our tribute gig outfit

All from Pelicans & Parrots

We are making a concerted effort to cater for our ever growing male customer base. Today we welcomed this stunning three piece tweed suit from Sweden. Gilbert & George eat your heart out!

Last year we were invited to take some behind the scene shots for the new NKWO 2011 look book.

Here are some images from the look book

The NKWO collection has something for every girl. We love the use of colour, column shapes, African prints and braided textiles, which accompanies the intricate hair sculpture from Angela M Plummer.

We were given this Barkley L. Hendricks program by Duro Olowu. This is an original program from Hendricks solo exhibition at The Studio Museum in Harlem, which ran from January 20-March, 30 1980.

His work was also featured here in London as part of the Back to Black exhibition at the Whitechaple Gallery in 2005. The exhibition featured Black Arts Movement in the US, Jamaica and Britain in the 1960s and 70s. Read more

A couple of weeks ago we were invited to the Gilbert and George exhibition at The White Cube gallery, before we went, we popped in on our old neighbour Duro Olowu.


We instantly fell in love with this geometric cashmere scarf in golden yellow from his A/W 2010 collection which was featured in vogue. With a little styling from Duro and a little deliberation over colour I knew I had to have it. 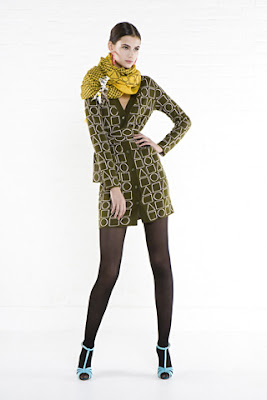 The three colours sit nicely next to an immaculate Hermès handbag that you would just die for.

Now a staple in my Dalston Pelicans & Parrots shop wardrobe

To read a more on the Duro Olowu shop click here
Posted by BNN at 4:03 pm 2 comments:

BNN
Bnn would like to meet: People on a 9 to 5, Artists, Musicians, Poets, Writers, Designers, Philosophers, Astrologists, Film makers and all other FREE THINKERS. Black Nerds Network is a collective formed to readdress the words, Black and Nerd. we are aimed at fashion thinking book reading kite flying Nerds.